Mona's core objective isn't to singularly delight its visitors — it's to disrupt, question, annoy them too. How might this anti-mission affect your design processes and outcomes?
I’m not sure if that’s how I’d define Mona’s core mission. I’m sure we’ve disrupted and annoyed people along the way, but that’s been a fringe benefit of the work we do, rather than a KPI. And Mona has definitely shown some artwork that is delightful and some that is disturbing, and some that is boring, and some that is the product of genius. Unlike most galleries, it’s generally left to the viewer to decide which one is which. Likewise with the design, there’s a belief in the subjectivity of the audience. For all I know, everyone might love our unreadably small fonts, ambiguous signage and jarring colour schemes.
But the overarching ethos has allowed for a degree of experimentation, and for design that some might see as more difficult. I’ve used colours designed to annoy, fonts that are really too clunky to be read, and played with the imagery using techniques that other galleries might find unacceptable, such as harsh cropping, theatrical lighting, laying text over images etc. Generally, artworks in museum collections are presented in a relatively straight, documentary style, in a clean white framework. While I often use this approach, I’ve also often presented artworks with a more subjective viewpoint, such as through a tiny detail shot or an unclear view across a darkened exhibition space. To me, it’s like the difference between medical photography and erotica. Pick a side.
Can you talk about some of the old and new research references you use and how they come together to form a body of work? I’m also interested in the intersection of how medieval design practices influence your digital work, and how technology affects traditional formats?
There are a few different theories about where serifs come from. One theory says that when the first stonemasons started carving letterforms into rock, the chisels would often chip away the stone in unanticipated ways. They found they could get a more reliable result if they started making a small curved groove into the surface before starting on the main lines of the letterform. Another theory says that the serifs come from the brushwork that was originally applied to the stone. The stonemasons were using the familiar forms of the brush to make the text more like what people were used to, and therefore more readable.
When the first typewriters were developed, they had problems with the typebars getting in the way of each other, so they made the keyboard as hard to use as possible, in order to force the person typing to press the keys as slowly as possible.
So I’m really aware of the fact that I’m writing this on a keyboard that designed to be as user-unfriendly as possible, in a typeface that was designed to work well when carved into rock.* It’s absurd, but once something becomes culturally ingrained, it tends to hang around.

For all I know, everyone might love our unreadably small fonts, ambiguous signage and jarring colour schemes. 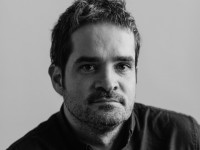