For the first whole year of Semi Permanent’s existence between 2002 and 2003, I remember sitting atop 1cm deep, matted, originally white turned charcoal / concrete coloured Loop Pile carpet, littered with those nasty upward facing nails that line it’s circumference. It was my seat, my desk and my drink holder. There wasn’t enough money or space for all the things that usually come with starting a company outside of a bedroom, and I would drive an hour every morning and night from the south of Sydney, because I couldn’t get enough of it. I mean I loathe that carpet, but I loved the anticipation of creation.
It was whilst sitting on that carpet, at the age of 21, where an email was returned from Banksy saying ‘Are we doing this you cunts?’ and a subsequent deal was struck whereby no personal details where exchanged, and instead on arrival in Sydney, an envelope with AUD$2,500 of cash was handed over to cover flights. He arrived with a smile, a green army jacket and a fat roll of stencils under his arm.
Since then, some things have changed, and some have stayed the same.
To start with, SP is still run by a small / nimble team. Banksy hasn’t emailed in a while. We’re still using Apple computers exclusively (with no partnership attached). The word ‘Design’ suddenly got real popular, while we’ve been talking-up how important it is for over a decade.
It’s an interesting point though. Design, back then, was pretty much graphic design to most. You were defined by that one skill you had. Today, we have lots of skills. Look at Raoul Marks who did our last titles - he’s a designer, but he's also a director, a 3D wizard and just when he thought that wasn’t enough, he decided to write the music too! And mind you, when we were discussing the music, because we were in the process of working on The Panic Office there was potential of using a Radiohead track - but he turned that down.
And then look at the Business of Design. Hugely disruptive companies founded by designers like Airbnb, or Disney, which is founded on Creativity and Innovation. I don't even have to mention the part Jony Ive has played in turning Apple into a billion dollar company.  That's an example of the power of you, and us all.
But putting the Design and Business aside for a second, there is always just the fun loving energy and Culture of creation that is just irresistible. Chef's changing the way we experience food; athletes inadvertently creating global brands out of themselves as they slide through life; or artists that create as expression.
The challenges and potential of the world today are exciting for us at Semi Permanent. I truly believe designers and the creative-minded have the power for huge change in our world. Design nowadays is communication, it's transport, it's experience and more. It has a great relationships with Technology and Innovation. Unlike so many other industries, we have the keys to change the world.
We had 10,223 beautiful people at our last Sydney event, and we’ve used this opportunity to listen. And it’s for these reasons that we’ve evolved, and we welcome you to be apart of this community - because what matters to us most, is you. We want to open the dialogue, collaborate and shape our future. We’re not here once a year as a live event anymore, we’re here every day. Starting with this new website, and beyond (we have a few more fun ideas in the works).
So for now, lets remember the good times, the shitty carpet we once all sat on, and lets create.
PS. Yeah, I'm not the best writer, but I want to keep it honest and straight up. 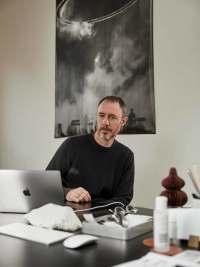